I had Monday off from work, which gave me a fun three day weekend with the collies.  Friday evening, I took Sophie and Maizie to the store to buy dog food.  The store was closing in 30 minutes, so it wasn't busy.  It was a fun outing for us, and they loved getting to go somewhere with me and loved all the attention from the staff.  I try to spend time individually with one or two collies a few times a week, so they all get extra attention.  They love it, and so do I, as it's nice to have the extra bonding time.

On Saturday afternoon, I took little Snow to Petco to do some shopping.  It was her first time, and I wanted to work on her socialization a little more.  We are still trying to find the right home for her, as the last couple homes fell through, which was no fault of hers.  Both families had things suddenly change in their lives and couldn't add a new puppy into the mix.  We will find the right place for her, it's just a matter of time. So for now, I am raising her and training her, and trying to make sure she is well socialized and spoiled.

On Saturday evening we took Winter to a different pet supply store, so she could work on her leash training and socialization as well.  My daughter brought Scarlett along, so she had a turn going somewhere and getting extra attention.  With a multiple dog household, it can be crazy, but we wouldn't have it any other way.  Plus, with three birthdays coming up, we wanted to pick up a couple extra things.

Sunday arrived, and it was time to celebrate Sophie and Maizie's 1st birthday.  We had made plans to meet friends of ours at the local park. They had the girls' brother, Finn, so we wanted to celebrate all three birthdays together.  Since Scarlett's birthday was on Monday, she got to come too.  They had so much fun, and by the end they were all exhausted!  So we said good-bye and headed home with our tired collies.  Once home, all three birthday girls were given their new toys, and everyone got a new bone.  Which was perfect, it kept everyone happily occupied while I ran to see a movie with my Mom.  Later, we had dinner and the collies were given their birthday cake.  (My daughter made one just for them, but everyone only received a tiny sliver.)

On Monday I grabbed my camera, and Scarlett and Ryder, and I drove to a park.  I had seen pictures of the park on Facebook, and it looked beautiful.  It was a bit of a drive, but worth it.  The park wrapped around a large pond, with four foot bridges and was landscaped with beautiful flowering trees.  It was one of the loveliest parks I have ever visited. I wish it was closer, as I would visit it often.  The park was in old Greenwich, CT, a very picturesque town, almost on the New York border.  If you have seen the movie,"The Girl On The Train," then you can imagine the type of town, as that movie could have been filmed in Greenwich.  Unfortunately, I had plans later in the afternoon, so we had to head home. 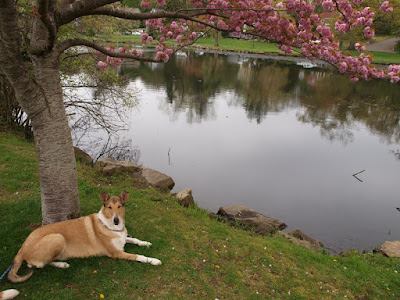 Monday afternoon my daughter and I drove Ryder to Yale University.  He was invited to do Therapy dog visits with the University students, to give them a break from finals.  It was a lot of fun walking around the historic buildings, and it was held inside a gated courtyard.  It was a great event, they had massage therapists, yoga classes, herbal aroma therapy,  a taco bar, crafts and games.  In our corner of the courtyard were therapy dogs, and the students really enjoyed visiting the dogs.  Many of them were missing their own dogs, which were back at home with their families.  I thought this event was a wonderful idea, and it really gave the students a chance to relax.  They all loved meeting Ryder, and many of them told us they had never seen a real collie.  We already made plans to return next year too. 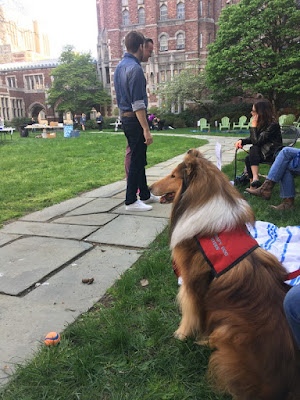 It was a busy three days, but it was a fun weekend for both the dogs and us.  Did you guys do anything fun this weekend?
Posted by Collie222 at 1:01 PM