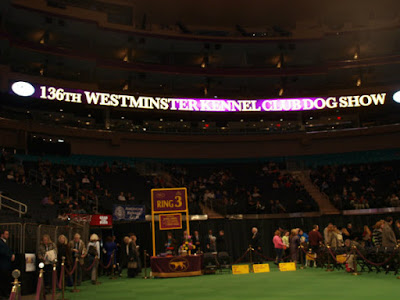 Probably the most well-known dog show, in the United States, is Westminster.  I grew up watching this dog show every year on TV, and I was fascinated by the glamour of it all.  What I didn't know, and didn't discover until many years later, is that what you see on TV is a very small part of that show.  Behind the scenes are the breed rings, where champions of every breed compete for Best of Breed and the chance to compete in the Group ring.  Also behind the scenes are thousands of spectators wandering around, trying to pet the dogs entered in the show.  Westminster is a benched dog show, which means unless you are in the breed ring competing, your dog has to be on display in his or her benching area. 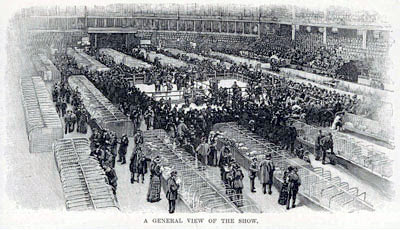 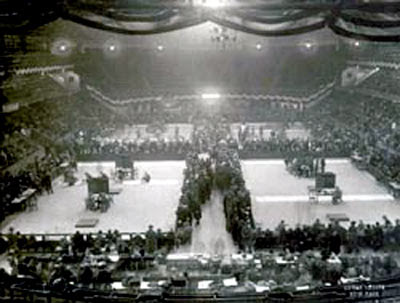 The benching area is a very small cubicle, where the dog is kept throughout the day.  The dogs are not permitted to leave the show until the end of the day, not even to go outside.  They have x-pens set up, with shavings, for the dogs to relieve themselves.  And the people who attend the show as spectators are everywhere.  Thousands and thousands of people, so many people that it is difficult to even walk from one area to another.  So many people, including animal rights groups, that the owners of the dogs fear to leave their dogs unattended for even one second.  At Westminster you can actually hire a guard for your dog.  And all of this is hard on the dogs, it's a very hot, very loud and very long day. 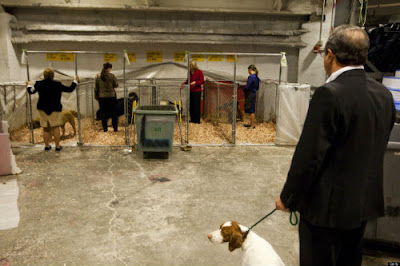 But it is the premier dog show in our country, and an invitation for your dog to attend is a coveted honor.  We have entered Westminster twice, and I am not sure I would do it again.  So why would people enter their dogs in this show if it is so stressful?  Because to win Best In Show at Westminster is considered the "greatest honor in Dogdom." 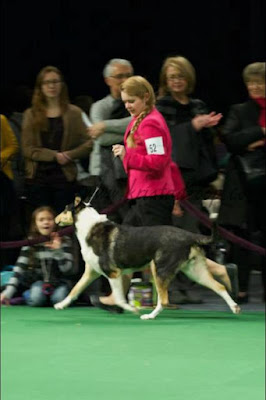 My daughter, showing our collie, Holly, at Westminster.

In all the years since the Westminster dog show first began, a collie has only won Best In Show once.  The collie's name was Laund Loyalty of Bellhaven.  He won Best in Show at Westminster in 1929, and he was only 9 months old at the time.  Loyalty was imported by Mrs. Ilch of Belhaven Collies, a very well-known kennel of that time.  He was bred by R.F. Roberts of Ashtead Collies in England.  He was sired by Lucas of Ashtead out of Jean of Ashtead.  In his pedigree were multiple crosses to CH Magnet, from whom my own line of collies also descends. 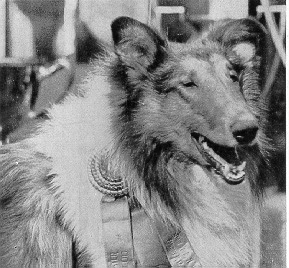 Westminster was Loyalty's first show in the United States.  Loyalty was handled by the Bellhaven kennel manager, Mike Kennedy.  He competed against 125 collies, and won Winners Dog and Best Collie.  Back in 1929, the collie was still part of the Working Group, and it was highly unusual for a collie to win this Group.  Best In Show at Westminster was usually judged by "Terrier Men," so terriers had won the show for many years.  But in 1929, the Best In Show judge was Dr Carlton Ford, a collie judge! 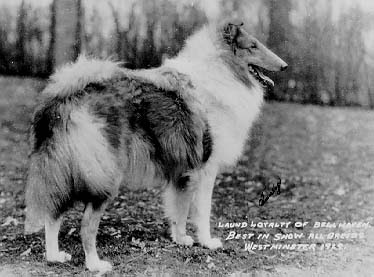 Dr. Burrows, a columnist at the time, wrote a description of Loyalty for <i>Dog Fancier Magazine.</i>  He described Loyalty as "he is in full bloom, full of life, and has a sweet expression, carries a wealth of coat, good head and ears, is sound all over, and a good mover."  Mike Kennedy wrote about the experience, "I knew I was in the running for the cheers of the people told me that.  I showed him on a long lead, and that is the way you have to show a collie.  There is no posing or holding your collie's tail.  What there was to see of Mrs. Ilch's collie, everyone could see and that is why I am the proudest kennelman in the world today!  Loyalty was shown with a free hand - a long lead.  His tail and chin hadn't to be held.  The puppy won on his own merits."

What is heartbreaking, is that this was Laund Loyalty of Bellhaven's only American show.  He retired after Westminster, and never finished his championship.  He retired amid threats to his life and rumors that acid had been thrown into his eyes.  Mrs. Ilch wrote a letter on September 3, 1974 about Loyalty.  "He was as near perfection as any collie could be and to think that after his great win, he was blinded, never to be shown again.  Someday I will hunt up a clipping of the dreadful death of the jealous fiend who did it - a person who from my first success, tried in every possible way to drive me out of collies."  No one knows the true story of what happened, or the name of the "fiend" who blinded the beautiful puppy, if that is what actually happened. 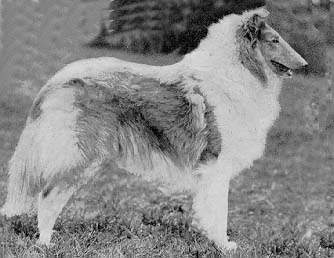 Loyalty, who was called Don, was not used much as a stud dog.  His stud fee was so high, that during that time, the time of the Great Depression, few could afford to breed to him.  (his fee was $150.00)  Laund Loyalty sired only one champion, a dog who played an important role in founding the Tokalon family of collies.  His son, CH Bellhaven Loyalty II, sired Tokalon Loyalson. (CH Bellhaven Loyalty II x Phyllis of Beechtree) Tokalon Loyalson is behind almost all the Tokalon collies.

Even though Laund Loyalty never became a champion, he will always be remembered because of his famous win, Best In Show at Westminster. 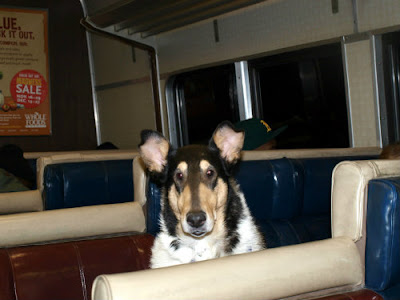 Holly, on the train ride home from Westminster.
Posted by Collie222 at 1:08 PM