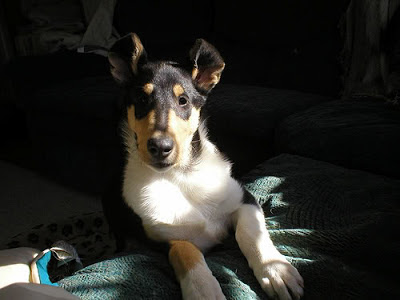 The next one of our collies I wanted to introduce is Holly.  She is our only tri-color collie, and like Abby, she is also a smooth coated collie.  Holly was born on Christmas Day, in 2005, which is how she earned her name.  Holly belonged to my sister, but my daughter was her handler.  My daughter started showing Holly when she was six months old, and they quickly bonded.  At that first show, a professional handler was showing Holly.  But Holly wouldn’t “show” for her, and the handler turned Holly over to my daughter.  She took Holly into the ring, and they ended up winning Winner’s Bitch!  They later went back in for the Puppy Herding Group, and they won a Puppy Group 3!  After that my daughter became Holly’s only handler and she put all her points on her, and finished her championship.  When my daughter’s junior handling collie, Mariah, was ready to retire, Holly was the logical replacement.  Holly loves to compete at dog shows, she is one of those dogs who thrives on the competition and hates to be left home. 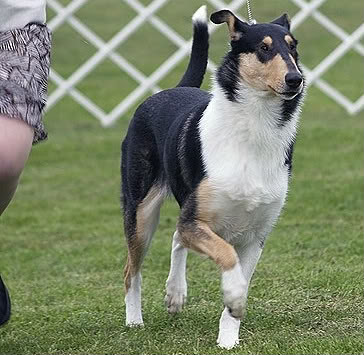 When Holly still lived with my sister, my daughter would go over their house to give Holly a bath.  She would groom her the day before a dog show, and then leave.  Holly would sit in my sister’s front window and wait for my daughter until the next morning.  She would maintain this watch until we returned to pick her up for the dog show.  At the shows, Holly would bounce with excitement while waiting for her ring time.  Holly thinks dog shows are fun, and win or lose, she always dances out of the ring with a wagging tail.  It’s as if she believes she just won Best In Show.


My daughter and Holly qualified to compete at Westminster twice, and while it is an overwhelming experience for most dogs, Holly seemed to enjoy all the attention.  Holly never fails to draw smiles from onlookers, as her enthusiasm in the ring is always evident.  Her nickname is “Holly, the happy collie.”  Holly is always focused on my daughter, and she changes her position in the ring with just the slightest movement from my daughter.  They are a perfect team, and have been from the start.  Holly is now old enough to compete in the veteran’s class at dog shows, and she is very happy to be back in the ring with her girl.


After competing in Westminster in 2010, Holly came to live with us full time.  She had stayed with us in the past, and traveled with us to dog shows on weekends, but she officially joined our family in February 2010.  In November of 2010, the week before Thanksgiving, Holly became very sick.  She had emergency surgery and was in the animal hospital for a week, we almost lost her.  I don’t know if it’s because I helped save her life, but she and I have bonded, and she is now my shadow.  She sleeps curled up against my legs every night, and follows me room to room.  My daughter is still her girl, and her best friend, their relationship has not changed, but I am “her mom.”  At dog shows, she is still focused 100% on my daughter, and even though she is a veteran, she flies around the ring as though she were still a puppy.


At home, being the oldest collie in the house, she has taken on the role of disciplinarian.  If the young collies are getting too excited, or too rambunctious in their play, Holly steps in to calm things down.  My daughter gave her another nickname, “the fun police,” because she is very serious about keeping Ryder, Kori and Scarlett in line!  But she isn’t always disciplining them, she will still play with them too.  Among the dogs, Holly seems to be closest to Abby, they sleep next to each other, and have never once quarreled.  They have a quiet, calm, sort of friendship.


Even though Holly has only lived with us fulltime for a few years, it feels like she has always been a part of our family.  She is a real character, and brings a lot of joy and laughter into our lives.  But one of her most unique characteristics is that Holly has a sense of humor.  When she looks at you, you can see the laughter in her eyes and in the wagging of her tail.  She has claimed her place in our hearts, after all, who couldn’t love a collie who lives her life with joy and a sense of humor?  She is a special girl! 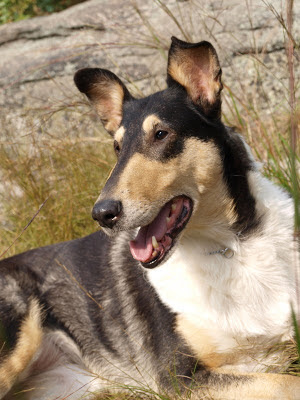 Email ThisBlogThis!Share to TwitterShare to FacebookShare to Pinterest
Labels: Holly, the gang